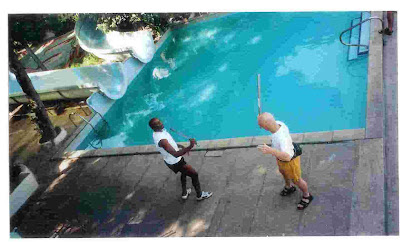 On Friday 30th October, my principal martial arts instructor since 1996, Guro Bob Breen , turned 60 years of age. A fantastic milestone by anyone's standards. Life is something to be cherished and never taken for granted.

His life so far has been once of achievement. His reputation and skill is legendary and he is the main reason that Guro Dan Inosanto is well known in the UK as he was the first person to bring Guro Dan to these shores close to 30 years ago.

If people really knew how far his 'hands' have spread in the UK Martial arts community in particular, they would be surprised. Many Filipino and JKD style martial artists who are now well known were at some point trained by Guro Bob or can at least trace their roots back to his lineage. Whilst you may not hear alot about it, those that know, are aware of his influence on the grappling and MMA scene. For example, in the late eighties and early nineties, he brought over people like Marc Mcfann, Larry Hartsell and then went on to bring John Machado and MMA supremo Sensei Erik Paulson. It was only health issues that limited his own personal grappling growth but that never stopped him hitting the mats.

Even when I took my Black belt under him in 1997, grappling was part of the syllabus and the extremely hard test.

Above is a picture taken of Guro and I in spain in 2000. Guro had gone to teach a seminar for Justo Diegez of KFM. I was fortunate to travel with him as his assistant. We were by the pool and engaged in some no armour padded stick fighting before lunch. It was an experience I will never forget and I confess it took my stick fighting to another level. Quite simply, using his skill, timing and accuracy, he beat my hands to death in such a way that quite apart from no longer being able to hold the stick any more, my hands were so swollen that I had to be fed my lunch as I could not eat myself.

I take this opportunity to wish Guro Breen all my best and thank him for the time he has invested in me.

Happy belated birthday to him!

For example, in the late eighties and early nineties, he brought over people like Marc Mcfann, Larry Hartsell and then went on to bring John Machado and MMA supremo Sensei Erik Paulson

I've heard from several people how there was apparently BJJ on offer at some point from the Bob Breen Academy, marking it as one of the earliest UK outlets for the sport.

I don't suppose you have any anecdotes, or specific dates and times? I'd be interested to hear more about it: I'm always keen to read more BJJ history, particularly when it is specific to the UK.

Dave will correct me if I'm wrong, but I'm sure Mauricio was teaching a class at the old gym (in the upstairs studio) on Hoxton Sq on a Sat once per month for a little while in 98 or 99?