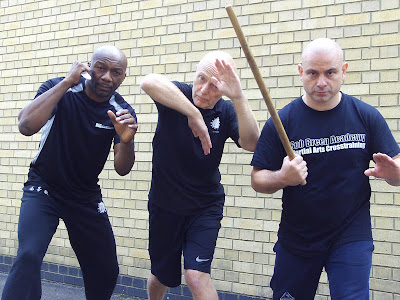 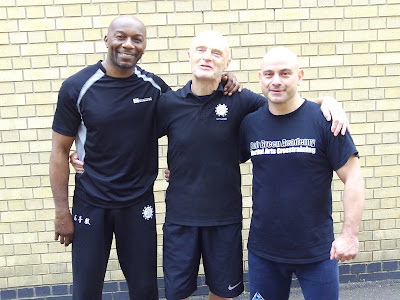 This weekend, my teacher Guro Bob Breen held another of his infamous 2 day Instructor camps in London. As usual it was well attended with locals as well as students from Germany and Italy. One of those students was Tony Ligorio, who is the official representative of Guro Bob in Italy and has been his student for nearly 20 years.
On the second day of the camp, he was formally promoted by Guro to the rank of FULL INSTRUCTOR making him only the second person to receive that honour.
It is a fantastic achievement and if Tony felt anything like I did when I was promoted in March 2008, I can say it's a feeling that cannot easily be described.
Tony is a dedicated family man and martial artist. I have trained and sparred with him countless times over the years both here and Italy. He is very humble and unassuming but many people get a real shock when he turns it on as he really knows his stuff in practice as well as in theory. I have been on the recieving end of a few of his right hooks over the years.
Tony is a long standing and very accomplished martial artist. Below is a summary of some of his achievements but certainly not all:
*Full Instructor - Guro Bob Breen
* Black Belt - Took the infamous test and passed - Guro Bob Breen
*Coach Level 1- CSW under Sensie Erik Paulson
*World Stickfighting Champion - 1998
*2 x European shoot boxe champion
*7 x Italian Kung fu champion
*Tai chi Instructor
*Kicboxing & MMA record of 81 fights with 73 wins
*Owner and operator of one of the largest schools in Italy
*has written books on Shoot Fighting
Once again - Congrats my friend
www.tonyligorio.it
Posted by David Onuma - Combined Fighting Systems at 03:26 1 comment: 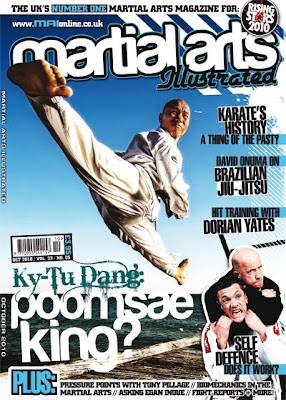 Apparently, some guy called David Onuma is in the October Issue coming out on 16th September 2010 :)

It was an honour and pleasure to attend the one year anniversary of Mill Hill BJJ on Sunday 12th September. The plan was for Roger Gracie to attend in order to teach a few techniques and officiate the grading that was also due to take place. It was more or less standing room only with what looked like 50 plus people in attendance to show their support.

There was the full range of belts in attendance with all from Black to White. Unfortunately, Roger was unable to attend so the guys had to make do with being taught by Nick Brooks and myself, with young Dan Strauss taking care of the warm up


(see vid below for numbers/warm up)

Nick (despite recovering from recent knee surgery!!) kicked things off by teaching a series of techniques fresh from his recent training with Master De La Riva.

He taught a variation of the lapel/posture break and arm wrap when the person is in your guard leading to a very slick back take and then an even slicker armbar if they manage to avoid the back take. It was niiiiicccce!

I taught some of the principles and concepts from the half guard position both top and bottom. Rather than concentrating on loads of techniques, I wanted to emphasize the need to understand what each hand and your legs are supposed to be doing from the top and bottom position. I then taught the way that I attack the Kimura from half guard which seems to have a high percentage success rate for me

After this began the formalities of the grading:

There was also a number of stripes given out to various people from white to Purple Belt. Parabens to them all!!

We then had some great rolling followed by the long awaited sushi trip in Edgware where some people ate like there was no tomorrow!!! Hehehe!