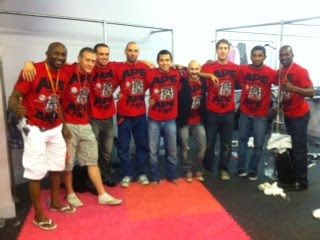 It was a great night of competiton which proved to be even more thrilling and nail biting than the build up.

There is a great write up of the competition by Meerkatsu which can be found here ; http://meerkat69.blogspot.com/2011/07/event-report-submission-1000-ii-at.html?utm_source=feedburner&utm_medium=feed&utm_campaign=Feed%3A+Meerkatsu+%28MEERKATSU%29

All fighters left it all on the line...but in the words of highlander..."there can only be one".

Congratulations to my former classmate Claudio on his submission victory and his domination of the other fighters. Having rolled with him many times in the past (unsuccessfully :) ), I know how his adversaries must have felt facing his skill, strength and pressure

Daniel Strauss continued to show why he is highly regarded as one of the best submission grapplers in the UK defeating 2 black belts in this last outing to add to the one he beat in the first competition. This will be a great warmup for the ADCC and provides all the incentive to do better.

I am so proud of the way he has developed both mentally and physically as a fighter and as we say in the trenches......'it's only just begun'

Posted by David Onuma - Combined Fighting Systems at 06:35 No comments:

This weekend I will again be cornering for student and friend Daniel Strauss when he returns to Liquid Envy to collect £2000.00

It will be a tough and difficult competition but he is well trained and up to the task. See you there
Posted by David Onuma - Combined Fighting Systems at 09:03 No comments:

We send our good luck to Carl Jackson who will be flying the flag for CFS this weekend at the Euroepan Championships in Poland. I know he will be looking to improve on the Silver from last year, and if anyone can do it....he can!!
Posted by David Onuma - Combined Fighting Systems at 09:01 No comments:

The Patches are here - made by Tatamifightwear.com

Team coaches please contact me to arrange to get yours for your students :)


Posted by David Onuma - Combined Fighting Systems at 08:57 No comments:

Congratulations to CFS Instructor Corey Donoghue who fought in his first amateur boxing competition which was put on by Tieu Promotions. He fought 3 rounds and convincingly beat a more experienced boxer on paper.

Further congratulations are due to Daniel Strauss of Mill Hill BJJ who was awarded his Brown belt in BJJ by none other than Mauriciao Gomes (7th Degree Red & Black Belt) and Roger Gracie - Multiple time World Champion (2nd degree Black belt). This probably makes him one of the youngest Brown belts in the country at 20 , if not the youngest. Well done to both guys!!
Posted by David Onuma - Combined Fighting Systems at 08:55 No comments:

On Friday 24th June, Nick and I , together with able Brown Belt Chris Hearn, Travelled to BK Fighters in Colchester to teach a BJJ workshop for free in order to raise funds for charity.

Thew whole thing was organised by Clinton O'shea who I think managed to raise £180.00 on the day.

First of all i'd like to congratulate Alex De Souza and his wife/team for putting together a great competition. It was organised well from start to finish, and even with unexpected hiccups, it still finished ONE minute before scheduled at 5.05pm.

As a referee, I witnessed some really good fights and an ever increasing standard of BJJ. There were 7 Blackbelt refs plus the ultra experienced Oli Geddes.

So far as the reffing was concerned I think it would be fair to say that on the whole the standard was good although there were probably one or two errors around the mats made including by me. It's a difficult job and I hope that nobody was disadvantaged as a result. I was disappointed that I had to disqualify a fighter for slamming in the white belt division, even AFTER I had warned him once already, but I guess he'll learn.

I congratulate the team champions Checkmat and also those that took second, third and fourth spot. Great performances by all and it was good to see the various team t shirts & hoodies floating about the place.

The superfights were good and continue to become a much looked forward to feature at BJJ Comps. Marco Canha and Andy Roberts put on a good fight which went the distance. Canha's experience came through but Andy showed why it is he wears a Black belt round his waist, particularly with his dangerous leg attacks.Neto and Luis battled it out, also going the distance. Neto took the early lead and held it, but he too faced very dangerous leg attacks from luis which a lesser man would have given in to.

Finally I'd like to thank my 'young' CFS BJJ team who put their all into their fights against more experienced competitors and their coaches Matt Benyon and Gary Baker who are doing a fine job. Our team came joint 12th out of 39 teams and I am very happy with that.

On the 12th June at Mill Hill BJJ we held the first seminar and grading for the year with students from:

It was great to see everyone and also present was Roger Gracie Black Belt Nick Brooks who also promoted oneo of his own students to Brown belt.

Even though there were no other belt promotions, congrats to all who received stripes on their belts. Keep up the good work and see you at the next one sometime in November
Posted by David Onuma - Combined Fighting Systems at 08:50 No comments: