Dating in the Dark!! 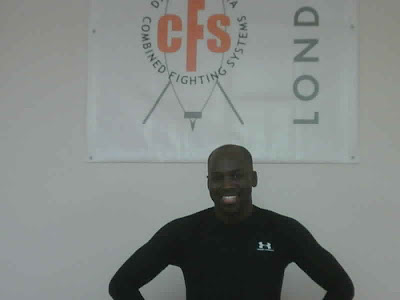 Steve Payne is a good friend, student and fellow member of the Bob Breen Academy.

He is a talented and respected martial artist holding a 3rd Dan grade in Karate who won the AMA National championship 3 times.

He is a Black belt in JKD/Kali under Guro Bob Breen.

He is a Blue belt in BJJ graded by me. As a white belt, he took the SILVER at the Kent Open in his first competition (2008) and in his second competition at the European Championships, Lisboa (2009), he took the GOLD. .

He is also a very secretive guy with a great sense of humour..........Lately Steve has been doing a little bit of travelling and 'busy' for no particular reason.

The reason became clear when he was spotted on Living Chanel 112 last night in the program "Dating in the Dark" . Apparently it's a show where people meet in a completely darkened room....talk....fondle or whatever ......and then decide if they want to see each other in the light!!

Like a true champion, Steve got the girl, but only he can say whether he ended up being a winner!!

(I took this picture of Steve at 7.30 this morning after we had finished BJJ training for an hour and me laughling like an idiot every time I reminded myself I was training with a TV celebrity)
Check out :http://www.livingtv.co.uk/shows/dating-in-the-dark/contestants/steve-payne.php
Posted by David Onuma - Combined Fighting Systems at 07:30