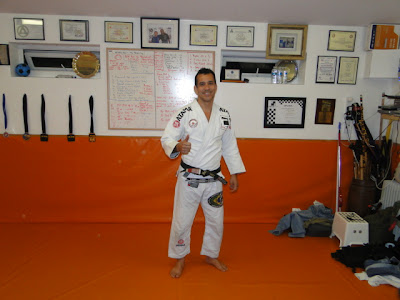 On Tuesday 4th October, thanks to the kind assistance of Daniel Pintado, I had the opportunity to train with, learn from and interview another BJJ Legend. This time it was none other than Master Julis Cesar Pereira, 6th Degree Black Belt and head of the GF Team Brazil.

I was introduced to him in Nottingham at the recent ADCC without knowing too much about him prior to that. I was particularly keen to train with him but not so much because he was the teacher of Rodolfo Vieira but because he was the teacher of Huanderson Pavao. Pavao as he is commonly referred to used to reside in the UK and taught out of the London Fight Factory. He was a master technician with and without the gi coupled with awesome strength and a big heart. I trained with him privately every week for about 9 months prior to his return to Brazil. I owe him alot. 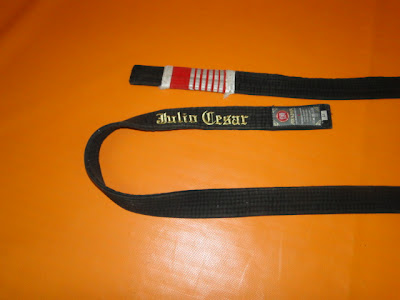 Anyway as you can imagine, I was particularly keen to see the source of Pavao's teaching and I was not disappointed. In our session we concentrated on passing the guard followed by sparring. He then kindly answered some questions about himself and put some techniques on video to share with you guys.

Rather than present the information in a question and answer type format, let me tell you what I learned about this very humble man with World class BJJ. 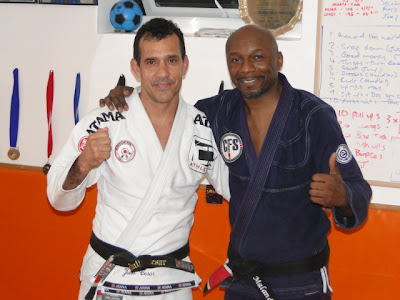 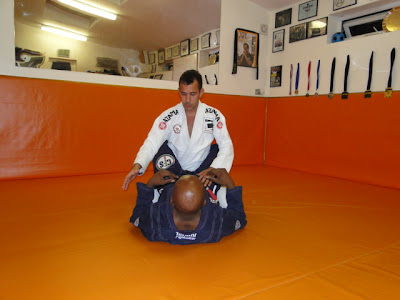 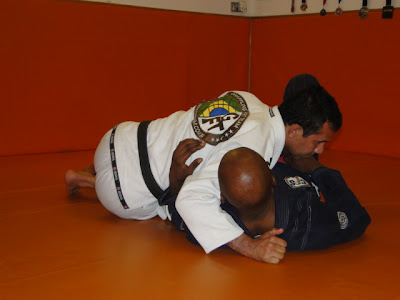 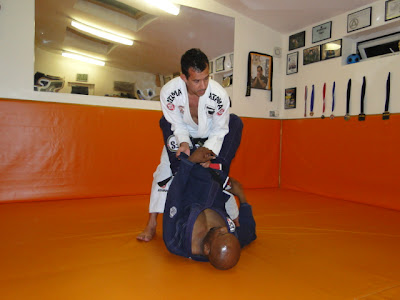 Julio Cesar Pereira was born in Rio de Janeiro, Brazil on 22nd December 1964. He commenced his training in BJJ under Prof Monir Salomao in 1974 and it was he who gave him his Black Belt some 25 years ago. He was awarded his 6th Degree by the federation in 2005 and gained his Black Belt in Judo in 2001.
He describes his specialities in BJJ as takedowns and passing the guard. He knows one or two things about leglocks too!
He has an enviable competition background, and in his own words 'I love to compete'. He won the Rio state championship 21 times, the first coming in 1974. He won the Masters and Seniors World Championships in both 2005 & 2006. He told me that his greatest competition success came in The American Cup in 1996 when he contested the final with a student of Rickson Gracie. There was literally no support for him but he managed to take home the Gold. He also had 3 memorable fights with Royler Gracie, losing the first 2 by submission and the last on points.
Having just come from ADCC, I asked him his views on how much time a BJJ player should train without the gi. He told me that normally he spends the majority of the time in the gi, but obviously depending on the competition , then the training would be adjusted.
I asked him if he trained Rodolfo any differently to any of his other students. He explained that where he is from, whilst the passion for BJJ is high, the standard of living is not the same. As a result most players would begin their training after a full day of work, rather than having the luxury of training 3 times a day. He told me that Rodolfo was the first person in the GF Team to completely dedicate himself to BJJ after he completed his studies. He had many other famous students but they all had to work and could not fully commit themselves to BJJ alone.
As a result of Rodolfo's success, he now has many students who want to dedicate themselves in the same way.
I was happy to learn that Mestre Pereira is a long time friend of Mestre Ricardo De La Riva. He told me that even though he was awarded his Black Belt one year before DLR, DLR is like an idol for him and a personal friend. They trained together for many years and DLR was the first person form Zona Sul (South Zone) to open up his academy doors to teach all manner of people whether affluent or not.
This was the Mestre's first trip to Europe and was happy that through his love of BJJ he had been able to travel to Spain, france, Switzerland, Germany and of course the UK. He stated that he had met a lot of new people and friends old and new.
The GF Team currently has one official affiliate in the UK, Gabriel Rainho who is both a BJJ & Judo Black belt. You can contact him at gabrielrainho@yahoo.com.br. He is based in London.
Video Techniques
Video 1 - Escaping the De La Riva Guard
Video 2 - Passing the half guard
Video 3 - Guard passing in action

I want to thank Mestre Julio for his time and teachings and it was such an honour to spend time with such a down to earth man without the politics that rears its ugly head in BJJ.

Great stuff Guro thanks for posting it!

This is fantastic David! Can't wait to drill this :)

Great vids Dave :) Gonna give these some reps in class ;)