On Friday 6th August 2010, it was my honour to promote Carl Jackson to the level of Associate Instructor in the Filipino Martial arts and in the Jun Fan arts.

Carl has been studying with me for 11 years and I have seen him transform into the World class martial artist that he is now. He has a Black Belt under Master Bob Breen and is also authorised to teach a family system of FMA direct from the Philipines. I have watched his eagerness to learn and test himself manifest into the realisation of his current being. Approximately 2 years ago he started travelling to Northampton to train with fellow CFS Instructor and World, European and British Stickfighting Champion Guro Roger Barnes to develop his armoured stickfighting skill.

Following that training he became the British Champion and obtained a Silver medal in the European Championships. This year, he trained mentally & physically for the World Championships which just took place in Mexico and he took Silver in the Single stick division. An outstanding achievement.

Becoming an Associate Instuctor (let alone an Apprentice) in my organisation is something that few people achieve mainly because of the high standards I have set in accordance with the standards set by my principal teachers (Masters Inosanto, Breen and Barnett). All of my students are my friends but the standards expected are never compromised by that friendship. Carl is an excellent student, and competitor with a promising future as a communicator of these arts.

He now joins the ranks of the few:

I also congratulate Terry Clark who in continuing his studies, has moved to Associate Instructor Level 2 (year 1) and is now in his 3rd year as an Associate.

Congratulations guys and thank you for making me proud 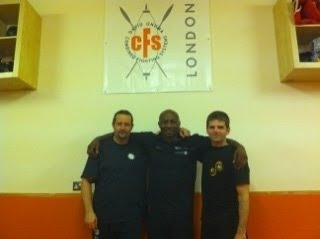 Me, Carl and Terry 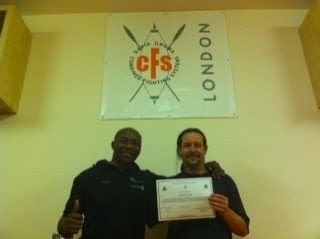 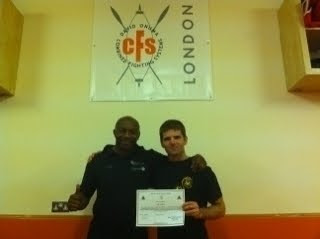