A 'centreline' punch from the past....

I recently got sent this photo by Sifu Segun Johnson (on the right in the pic). The picture was taken sometime in the very late eighties at Sifu Nino Bernardo's famous Basement Kwoon in North London. Segun even then was one of Sifu Nino's top students and (from memory) was one of only 7 students at that time that had completed the whole system under Sifu Nino.

The picture really takes me back and I notice and remember many things:

1. Segun was giving me a pasting :)
2. I had an AFRO..... Hahahahahahahahahahahahahahha!!!!!
3. Geeez my arms were big in that pic!! Wouldn't it be great if I could cut n paste onto my body now 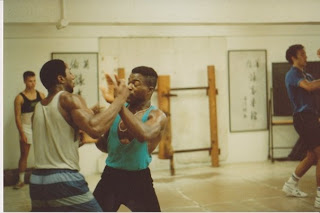