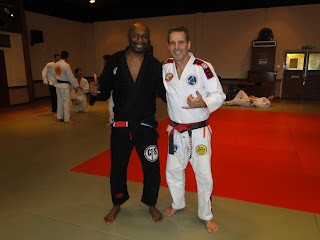 As you may be aware, Mestre Pedro Sauer, 8th Degree Red & Black Belt came to the UK for the first time in February this year and it was also the first time I had ever met him. He was extremely humble, relaxed, skillful and giving...a true master of the martial arts.

In the seminars he taught, he asked what people wanted to cover and responded accordingly. It was plain to see that his knowledge and understanding of BJJ was of the highest level and I guess it gave me an insight as to what it might be like to train with someone like his mentor and teacher Rickson Gracie.

He very kindly allowed seminar participants to film techniques and as of a result of this I am able to bring you a sample of the material that he taught.

In one of our conversations, he explained to me what it was like to train under Helio Gracie and be in the same class as all the other Gracies. He told me that he would often get submitted 40-60 times a class by all the Gracies and that because of his attitude and good nature, he would often be taught more perhaps than others. He knew all the signature moves of all the Gracies although he confessed that he could do little to stop the inevitable. His goal at that time was not to avoid being submitted but rather to reduce the amount of times that it happened...Maybe less than 40 times would be a good night.

Thank you once again Mestre!!