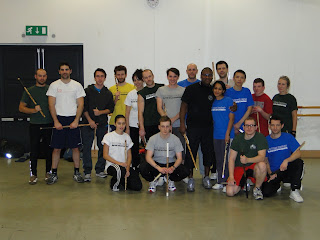 Sorry for the late post regarding last weeks class but I've been a busy man!

Anyway, last week, we started training with the stick and knife, commonly referred to as Espada Y Daga. It's correct term is Baston Y Daga as we were using a stick as opposed to the sword.

Espada Y Daga is often seen as the true test of the skill level of an Escrimador or Filipino maartial artist because of the skill required using these weapons which are both long and short, and require a deep understanding of footwork, zoning and fighting multiple opponents.

The video below summarises the techniques we covered in class, but in short we did the following:-

2. 3 strikes then the feeder attacks with the knife which is countered using the correct angle

3. 2 strikes then the feeder attacks with the knife which is countered using the correct angle

5. Inside sweep to uppercut on the knife

6. Inside sweep to uppercut on the knife followed by angle 1 strike