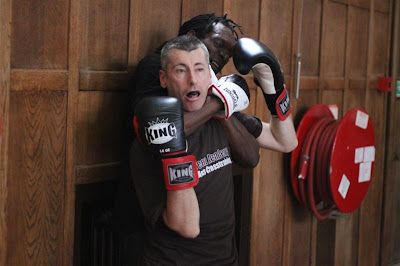 Julian Getting choked out by Winston Fraser just before he got hit again... 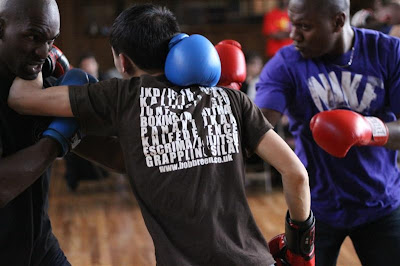 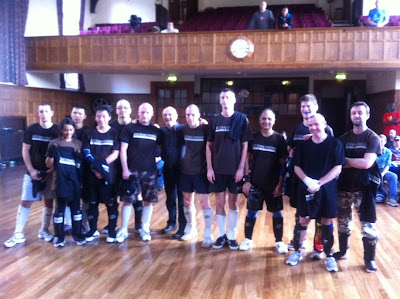 The Happy Group with the Guro


Sunday 11th September was an important day internationally for a number of reasons an indeed it was also for the 12 participants selected to take the infamous Bob Breen Academy Black Belt test.

Let me begin by giving you a little bit of history about the test and what it invloves.

In order to be able to take the test, you will ordinarily have been training with Guro Breen for several years and have taken the tests at the previous levels. There are 2 at Brown belt level. The test is normally reserved to those who are class members but on the odd occasion Guro will allow students who train with him on his instructor camps and who have shown the appropriate level of skill, determination and heart to test. Taking and passing this test gives you the right to say you are a personal student of Guro Breen and hence claim lineage back to Guro/Sifu Dan Inosanto and SiGung Bruce Lee.
The main arts taught at The Academy are :

In addition techniques and strategies are also drawn from

It is because of this, it normally takes along time to reach the level suitable for testing.

The test itself is HARD and long, typically lasting 4-5 hours. You need to know your stuff and you need to be in shape. The test respects no one. Men, women, old and young are all treated equally. If you have any weaknesses....they will be exposed...whether you knew they pre existed or not.

There are technical elements tested:

Then there is sparring:

*you may spar in all areas or some but must be prepared for all at the direction of Guro Breen.

2 on 1 is a heartbreaker. There is no where safe to hide from the experienced Black Belts who seemingly push you beyond your limit.

The Muay Thai padwork is not for the faint hearted either especially when you are 'worked' over by 2 x European Muay Thai champ Winston Fraser or Long term Black Belt and student of Guro Inosanto, Savash Mustafa.

The twelve called...answered and were successful. All were tested, rocked, pushed but came through the other side as individuals and as a group. The oldest participant was 49 years of age who told me he had been training 5 times a week for the past 6 months and was now going to take it a bit easy and cut it down to 4 times a week......Class!!

First of all I give praise to Guro Breen for his leadership and training over the past 30 plus years. Anybody who is anybody in JKD/Kali in the UK has been taught by him at some point. Secondly I praise the group for their hard work and entertaining the spectators. Thirdly I am extremely proud of Husna Nessa (the only female), Richard Lee and Barry Harte all of whom I have had a hand (or arm) in training over the years.

In closing....I say what I have said many times before in the past....attaining the Black Belt is fantastic, but it is ONLY the beginning. It all starts from here, as did mine in October 1996. Where will you be in 10 years time?!!