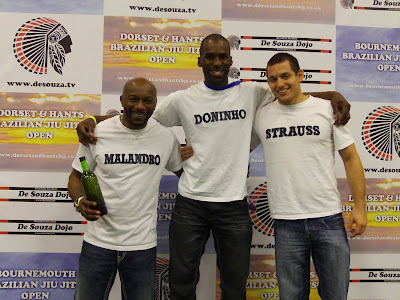 A big congratulations to Corey who won his division on Sunday despite having a hidden but badly injured rib. He had one fight but was still the victor in very convincing fashion dominating throughout and losing no points. He fought in the mixed absolute division too but couldn't on this occasion manage to get past the 20kg difference between him and his opponent.

CFS BJJ Bournmouth also had a very small presence at this competition. They didn't quite perform as well as they could but watch out....it's early days. Good effort!!

The competition was well run and there was a decent turnout even though I understand it was not quite as busy as last year.

I was refereeing pretty much the whole day and managed to assess the general standard of BJJ. As a whole, It was very impressive at all levels (white to purple). Being as honest as I always am, there was a particular team present with some very very good white belts, who upon further investigation, have perhaps TOO much experience as white belts and really shouldn't have been entering at that level.....not a good trend developing there I suspect.

There was good unity from all the refs and Instructors and the following Blackbelts were in attendnace with their respective teams:

(apologies if I missed anyone out)

I had a great day out particularly travelling there and back with Doninho, Strauss and the Android Andrew Marshall (the kettlebell guy - hehehehe!), who next time won't forget his T shirt!
Posted by David Onuma - Combined Fighting Systems at 01:49

Nice one Corey, you smashed it up again by the sound of it!! Darren

Thank you Darren my man.

When are you visiting UK?