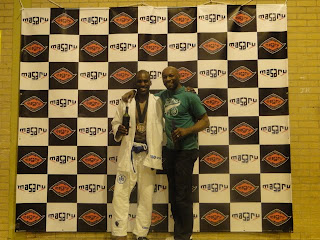 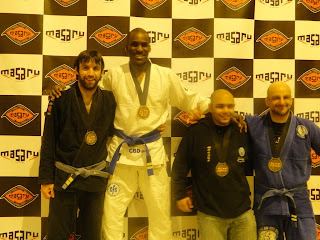 Congratulations to Corey Donoghue - The new British BJJ Open Champion 2010.
Corey did himself, his team and I proud at the tournament on Sunday 28th March 2010.
He fought in a division of 19 fighters where the standard was high. He had 5 fights dominating everyone and never lost a SINGLE POINT or ADVANTAGE.
He swept four out of his 5 opponents and racked up over a total 45 points, beating one opponent 19-0. What is equally as impressive is the fact that he seriously injured his knee and ankle in the second fight and the medics told him not to fight any more.....but they didn't know Corey very well as he had 3 further fights. He wanted to fight the Absolute division too, but as his coach I had to think of his safety and called it a day.
As a team we thank all our friends and supporters who are always there for us :)

Congratulations to a fantastic fighter and very nice bloke to boot. You deserve it, well done mate.

THANK YOU soooooooo much guys for your really humbling comments.

I really do appreciate that.

Was really good to see you Meerkatsu.
See you soon dude.